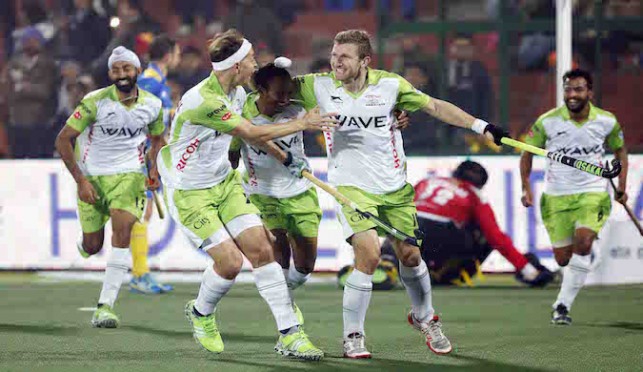 Tuesday, 20 January 2016, Chandigarh: The Delhi Waveriders today defeated Jaypee Punjab Warriors 5-4 in a high energy match played at Chandigarh in the 4th Coal India Hockey India League. The third match of the league unlike the last match played at the same venue yesterday, witnessed an attacking game with goals raining from both the ends, ensuring the spectators enjoyed every minute of the match.

The new scoring system has kept all the teams on their toes adding excitement to the already fast game of Hockey. This came to display once again today as the third match of the 4th Coal India Hockey India League began with Delhi Waveriders pressing hard on Jaypee Punjab Warriors from the very first minute. The attacking game of the visitors soon showed results when Yuvraj Walmiki scored a field goal in the 9th minute giving Delhi Waveriders an early lead of 2-0. The visitors could not hold on to their lead as the hosts Jaypee Punjab Warriors struck back with an equaliser in the very next minute through Matt Ghodes. The game there after saw numerous unsuccessful penetrations into the opponents circle from both the sides, until the 24th minute when Rupinder Pal Singh converted a penalty corner to give the Waveriders a hard fought lead of 3-2 in the game. The visitors pressed harder and were again rewarded with their second penalty corner in the 28th minute which too was converted beautifully through Mark Pearson giving the Delhi Waveriders a comfortable two goal (4-2) lead in the game. The hosts pressed hard on the counter and successfully converted a penalty in the 29th minute through Christopher Ciriello, to lag behind at 3-4 at the end of the first half.

The second half began on an attacking note with the Delhi Waveriders striking in the 36th minute through a penalty corner conversion from Rupinder Pal Singh extending their lead to 5-3. Jaypee Punjab Warriors tried many attempts thereafter to reduce the gap but could not capitalise on the opportunities that came their way. Even a penalty corner conversion in the 54th minute through Jake Whetton could not help them much as the match came to an end with Delhi Waveriders defeating Jaypee Punjab Warriors 5-4.