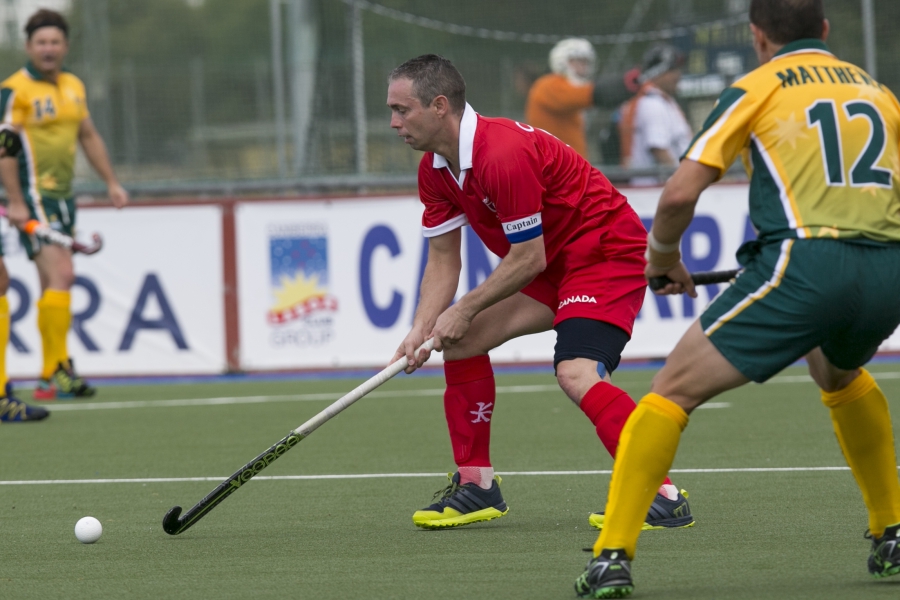 I just returned from the Masters World Cup in Canberra, Australia where I had the pleasure of donning the Canadian jersey again after a 20 year hiatus. I never would have believed that hockey could be as fun and as competitive as it was back in the days when I played for Canada in my 20’s, but I was pleasantly surprised. In fact I was more than surprised I was outright impressed verging on awe struck! Folks, life begins at 40 because thats when Masters hockey starts. The beautiful thing about playing in the Masters World Cup is it breaks down into age groups that make sense starting with over 40’s, over 45’s, over 50’s and over 55’s. When you reach 60 then your into the Grand Masters and that in itself is feat considering how hard it is to play competitively at 50. The level of player at this tournament was incredible, Players commit a year to training for this tournament and in many countries have try outs to ensure the best team goes. Now, in some cases, like Australia, where the cost can be prohibitive you may not get the best team showing up but remember many of these counties have Masters Leagues so numbers are not an issue like they are in Canada.

While our schedule consisted of 3 games in a row in as many days followed by a day off another game day, a day off and two more back to back games, we were able to get a day off to go to a beach and see kangaroos. At the end of the trip we had two more days in Sydney where we were able to see the local sights including the Sydney Opera House. The rest of the time this old body, and many others like me, took advantage of the cheap physio offered by the generous AIS Sport Medicine Team.

How did we do as the Canadian team? Well despite it being our first time sending both a mens and women’s team we had a lot of fun. No we didn’t win any of our games but the goal was to compete and get aquatinted with this new and exciting world of Masters Hockey. We could have finished higher and certainly had or chances to beat the USA and Malaysia but as one of the american players pointed out, we are where they were 4 years ago. They came in poorly prepared and with a less than experienced team and had a similar outcome. This tournament they showed up with four teams including two women’s teams and finished above sixth in all ages so that’s inspiring me to continue training.

I think Canada has for too long supported the junior and senior program and many of our finest players finish at a very early age to become coaches giving up the joy of playing field hockey as an over 40 adult.There are plenty of recreational teams and opportunities to play socially but the ability to play in a very highly competitive environment had never been an option before. I hope that parents and ex players take a page from the Aussies and England’s lead and start a resurgence of over 40 players who are interested in getting fit, learning to play hockey at a higher level than they play in rec league and want to commit to making Masters hockey a success in the future.

If you interested in what the Masters Men’s or Women’s has to offer and you are over 40+ (of 35+ for Pan Am Masters) then feel free to contact me Guy Manwaring (gremlinchaser1965@gmail.com or Ian Baggott (ian@baggott.ca) from Field Hockey Canada.