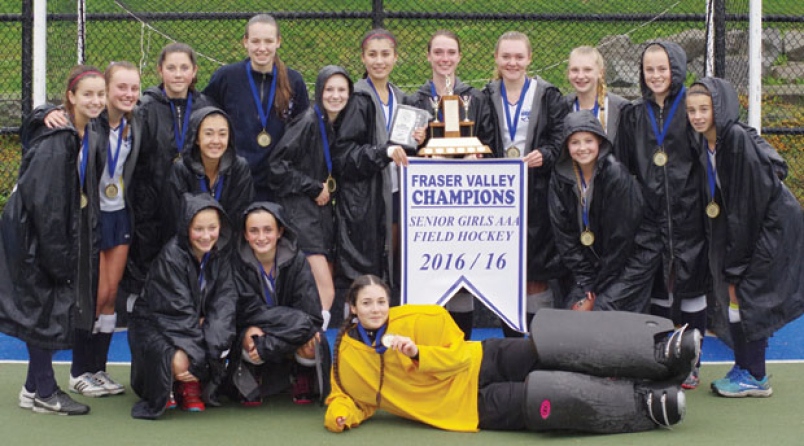 South Delta Sun Devils battled some strong teams and wet weather to capture last week’s Fraser Valley “AAA” Field Hockey Championship. The girls will return to Surrey for the provincial tournament, starting Wednesday.
A familiar trophy is back in the hands of the South Delta Sun Devils senior girls field hockey team after a two-year hiatus.

The Sun Devils are once again Fraser Valley AAA champions thanks to an unbeaten run last week at Tamanwais Park. South Delta is now gearing up for the provincial “AAA” championships which start Wednesday in Surrey.

“One of the goals we set at the start of the season was to get the trophy back so it’s great to see the girls do it,” said longtime coach Neil McLennan, who has now guided SDSS teams to 17 Fraser Valley titles.

The Devils broke a 1-1 tie with a second half goal then relied on their young defence to hold the fort – especially with the Coquitlam school pouring it on in the dying minutes of the match.

That’s where experience gained at tournaments last month in Duncan and Victoria have paid dividends. The Sun Devils roster features six players in Grade 10 and another in Grade 9 with only three slated to graduate. Two of those Grade 10s are starting defenders.

“Learning to play under pressure and battling your nerves is a big part of it,” continued McLennan. “These girls play club hockey but, emotionally, it’s just a different level with higher expectations in high school. The girls held up well.”

South Delta opened the championships with a win over Riverside then had its hands full with another Coquitlam school – Charles Best – squandering a two-goal lead then managing to pull out a 3-2 victory.

McLennan’s outlook on the provincials is guarded as usual for good reason. Over the years, he has seen teams loaded with seniors not make the expected run towards a podium finish, while others have come out of nowhere to earn a provincial medal.

That was the case two years ago when a young South Delta team lost 3-0 in the Fraser Valley final to Heritage Woods, only to produce a surprising bronze at the B.C. tourney.

The goal is to get through round-robin play with a top two finish in their group and see what happens in the quarter-finals.

“The way the girls are playing right now, a top eight finish is realistic,” added McLennan. “We had a slow start last year in our first game against McMath and it cost us. We have to make sure that doesn’t happen this time.”