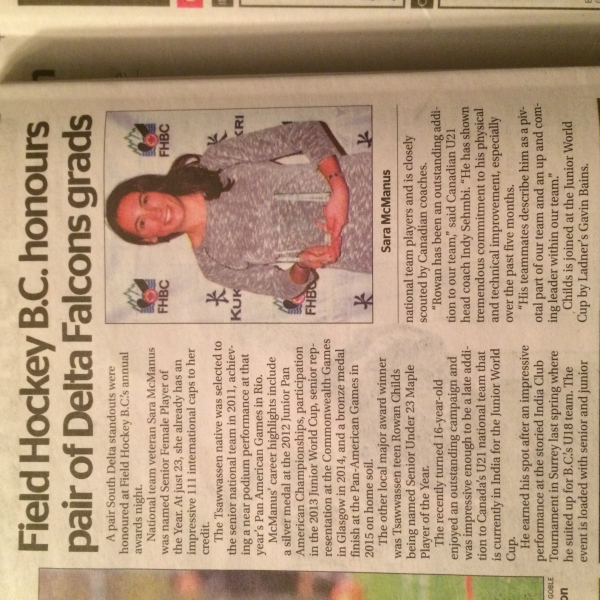 Field hockey BC annual awards night spotlighted two special under 23 players from Tsawwassen naming Sara McManus Senior Player of the Year while recognizing Rowan Childs as Senior Maple Player of the year. Sara is just 23 but has racked up some amazing achievements since making the senior national team in 2011, including: silver medal at Junior Pan Am Games, qualifying for Junior World Cup, representation at the 2014 Commonwealth Games in Glasgow and over 111 International Caps. Rowan Childs on the other hand has made impressive strides this year being named to the Canadian Junior World team competing in Lucknow, India as the youngest player at only 16 after an impressive showing at the India Club tournament back in July. Both players have grown up with the Falcons for most of their Junior Careers and are great embassadors for the sport and the impressive development program The Delta Falcons has continued to nurture with their help. We wish them the best this year in their respective competitions and hope to see them on a streaming service very soon.

Junior World Cup will be streamed starting Dec. 9, 2016. Link with be send out shortly.