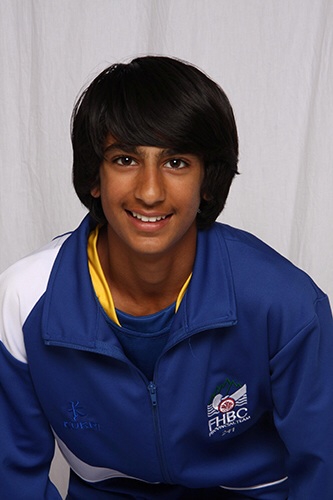 A long time falcon until moving into India club, Gavin has mad an impact with the Canadian national team program! Best of luck to Gavin, great to see you wearing the Canadian colours!

Ladner defender-midfielder Gavin Bains is on the long-list of 25 names selected to Canada’s U18 Men’s field hockey team headed to the Youth Olympics in Nanjing, China this August.

Bains started playing field hockey at five years old (2003) with the Delta Falcons and continued until 2010. Ex-Canadian National player Guy Manwarning coached Bains for the next few years, becoming a mentor and instilling in him a love of the sport.

In 2012 he made the provincial team along with his sister Monika. It was the first year he played field hockey all year long. In 2013 Gavin stopped playing other sports (soccer and squash) to focus all his energy on field hockey.

After going to Ontario with U16 Team BC in 2013 Bains received a nomination by Field Hockey BC as a Canadian Sport Institute Athlete. This success made him work harder and focus on all aspects of becoming a better field hockey player.

When Bains received the call to Field Hockey Canada’s U18 camp over spring break he focused all his energy on doing his best and putting everything together that he learned from his coaches over the years. The effort paid off, earning him a spot on the long-list.

In preparation for the 2014 Youth Olympic Games, Field Hockey Canada began with a comprehensive list of athletes from across the country. The list was narrowed down through a series of sessions and camps in both Western and Eastern Canada. It is from this list that the final nine athletes to compete in the Youth Olympics will be selected.

Canada’s participation in the Youth Olympics was secured by qualifying in the Pan American Youth Hockey Championships in Puerto Rico in February, and by selection from the Canadian Olympic Committee as the team sport of choice to represent Canada in Nanjing. Whereas nations can send multiple teams to the Olympic Games, the International Olympic Committee restricts each nation to one team sport per gender for the Youth Olympics.