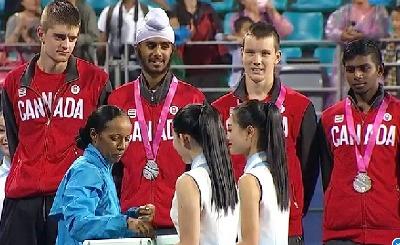 Nanjing, CHINA – The Canadian Under-18 men’s field hockey team is headed home with a Youth Olympic Games silver medal after dropping a close final match in a shootout to World No.1 Australia in Nanjing, China Wednesday morning.

For the third straight match, Canada had a chance to win the game in a penalty shootout. But unlike their previous two tests (a quarterfinal win over Pakistan, and a semifinal victory over Spain) the Canadians came up one goal short.

The Youth Olympic Games were the first major international competition in which this new adaption of field hockey – Hockey 5s – was played and the Canada showed as one of the world’s best.

The final match, however, started as most in the hockey world may have expected, with extreme pressure from the Australians.

Within the first minute, Canadian goalkeeper Liam Manning was forced to make two big saves to keep the game scoreless.

It wasn’t long, though, before the Australians broke through, as in the third minute Alec Rasmussen gave the Aussies the 1-0 lead.

Canada had their chances in the first period, namely from captain Brandon Pereira who created several chances on his own but was not able to beat the Australian backstop.

In the second period, Canada came out with more purpose. They controlled possession of the ball and it eventually paid of with a goal.

A shot from Vikram Sandhu was deflected in unintentionally by an Australian. The game was tied in the nineteenth minute.

Australia quickly regained the lead in the twenty-first minute when Max Hendry picked up his own rebound and put it by Manning.

The game stood at 2-1 Australia after two periods.

Canada went down to three men after a card in the in third period, and with the advantage Rasmussen picked up his second of the game to make it 3-1 for Australia.

The gold medal seemed to be all but won by the guys from down under.

But as they had shown throughout the tournament, the Canadians proved to be resilient.

Amrit Sidhu scored on a great solo effort with two minutes to go to bring the game to 3-2. And then, with only thirty second to play, Sidhu deflected in a shot from Balraj Panesar to tie the game at three.

Sidhu was Canada’s highest scoring player, with nine goals in regulation and four in the shootout during the tournament.

Canada’s third playoff match, like the first two, was going to a penalty shootout.

The first four shooters – two from each side – scored, including Sidhu and Panesar for Canada.

The difference came in the third and final round when Canada failed to convert. Australia’s Corey Weyer beat Manning on the final shot and the Australians won the gold.

Canada won the silver and earned every ounce.

After two wins and two losses in the pool stage, the Canadians were out to prove their worth in the playoff round.

They did with wins against the high-scoring Pakistan and a rematch victory against the undefeated Spanish, and Canada headed to the final with Australia also looking for redemption after a pool stage loss.

While many may have discounted the Canadians from the beginning, they didn’t do so for themselves.

It was a testament to their preparation, skill, and resiliency and the reason they were able to come away with a silver medal at the Youth Olympic Games.